The Leap: How to Survive and Thrive in the Sustainable Economy

The Leap: How to Survive and Thrive in the Sustainable Economy by Chris Turner

If the recent global recession and economic turmoil are going to teach us anything, it should be that business as usual is not going to cut it anymore. Economic change is happening faster than we are used to reacting. We are in a new economy where businesses, communities, and governments at all levels need to adapt by taking a giant leap rather than a small step.

So argues Chris Turner in his book The Leap: How to Survive and Thrive in the Sustainable Economy. Turner, a leading Canadian writer on sustainability and the cleantech industry, makes the argument that civilization needs a sustainable new operating system, and fast. Similar to his Canadian non-fiction predecessors such as Jeff Rubin, Turner develops a compelling argument for making a leap to sustainability.

His argument is simple: the status quo is unsustainable, and the solution is a quantum leap in practice employing disruptive techniques and ideas. The reader is sometimes left thinking, "great, but how do we do it?", and Turner responds with a wealth of examples of Canadian and international businesses, communities and governments who've made the leap and are now thriving, dismissing critics who argue that green and sustainable are synonymous with impractical and inefficient. Take Germany with its strong renewable energy mix, achieved with what was initially thought to be a radical feed-in-tariff program; or Bogotá, Columbia, where investments in a highly-efficient public transit system, 300kms of bike lanes and a mix of public spaces with parks and libraries helped reduce the local crime rate by 70% in ten years.

For economic developers, Turner's book repeats some of what we often hear: that new urbanism, renewable energies, and local solutions hold real potential for change. But he also reminds us that loss and sudden change are inevitable and that they offer substantial opportunities for future prosperity. If you're considering making the leap, it's well worth picking up a copy here. 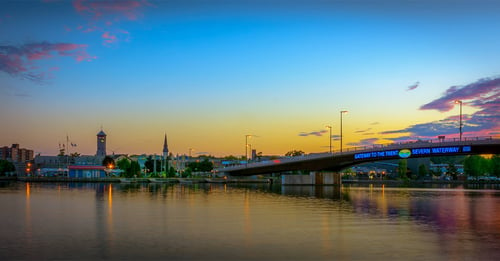